You are here: Home / A Measure of Happiness / Author Interview: Three Questions For Author Lorrie Thomson Who Explores Writing & Inspiration For Her Third Novel

I’m such a rebel. Not really. But today I am sharing something a little different with you, my WFW friends. In celebration of the release of Lorrie Thomson’s third novel, A Measure of Happiness, I’ve asked her THREE things I was very curious about. When I interview any author I ask questions I really want the answers to, figuring if it’s interesting to me, it might be interesting to all of you too.

Since I’ve read all Lorrie’s books and have interviewed her before, I wanted to dig deeper — a theme of writing women’s fiction, right? So today Lorrie shares with us real insights into how and why she wrote this story, which takes a character from her second novel, What’s Left Behind, and makes her the focus.

Please welcome Lorrie back to WFW and enjoy everything she shares with us today! 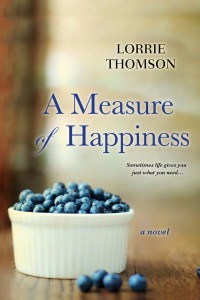 Amy: I’d love to know more about plucking a character from one novel and placing her into the spotlight in another, without the book being a prequel or sequel.

Lorrie: Thanks so much, Amy, for asking me back to Women’s Fiction Writers to discuss A Measure of Happiness!

In A Measure of Happiness, small-town baker Katherine Lamontagne has spent the last twenty-four years giving out cakes and comfort to the citizens of Hidden Harbor, Maine, and keeping the secret of the son she gave away to herself. Until that son comes looking for her, making her reconsider her life and the meaning of family.

This is the first time I’ve returned to a story location and written a novel that contains characters from a previous work. But, even though A Measure of Happiness takes place fifteen years before What’s Left Behind, it’s not considered a prequel. The books are stand-alone novels. And although you’ll likely remember Abby Stone’s best friend, Celeste Barnes, from What’s Left Behind, this is the first time you’re privy to her point of view.

I adore A Measure of Happiness, and I’m so excited to share it with you. But if it weren’t for my agent and editor, I might never have imagined this story. You see, when I passed in the partial manuscript for What’s Left Behind, my agent, Jessica, suggested I come up with an additional story idea. Could I perhaps feature one of the characters from What’s Left Behind? Was there someone from that story I wanted to get to know better?

Celeste, with her fierce loyalty to Abby and her snarky mouth, was the first person who came to mind. In fact, I enjoyed Celeste so much that originally in A Measure of Happiness, hers was the first voice you heard. That’s where my editor came in. While Celeste is a fascinating character with personality to spare, secrets, and lessons to learn, she’s only twenty-two years old. For that reason, during a phone conversation with my editor, Peter, to discuss opening scenes, Peter shared his concern that A Measure of Happiness might be considered NA, New Adult. “Okay,” I said, “I’ll start over.” To that Peter replied, “Don’t start over. Just flip the scenes so that Katherine’s point of view comes first.”

I flipped the scenes.

I’m really glad that I took Peter’s advice. Because even though I’d spent a lot of time thinking about Celeste, her issues, and her back story, I hadn’t yet fully considered Katherine. Luckily, when I asked Katherine nicely, she was more than willing to share her secrets with me, too. She told me about the son she gave away for adoption, and the way that one event had shaped her life. She told me the real reasons she’d divorced Barry, a man she so obviously still loved. And she told me about the ghost from her past, the legacy of shame from a childhood that haunted her.

In A Measure of Happiness, Katherine isn’t the only character with secrets and shame. We all walk around with voices in our heads. Sadly, those voices often tend toward the negative, and Celeste’s inner monologue is no exception. For Celeste these voices, also known as the not-so-nice lies we tell ourselves, lead her to seek relief that’s neither healthy nor uplifting. Yet through it all, she keeps her signature snark and sense of humor.

In addition to Katherine and Celeste, you’ll get to know Zach Fitzgerald, a newcomer to Hidden Harbor, Maine. Just weeks after Zach’s mother kicks him out of the house—she has her reasons—Zach eats his way through two dozen Casco Bay bakeries, wanders into Lamontagne’s, and changes the course of both women’s lives. But make no mistake, in the end, each character finds his or her own way of making peace with the past.

Amy: So did your thoughts change about the town and characters as you wrote this new novel and ostensibly learned the backstory?

Amy: Next, I asked Lorrie to share places that inspired A Measure of Happiness and she answered with both words and pictures! 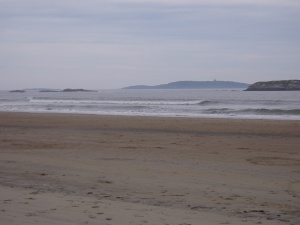 2. View from Fox Island to the Atlantic Ocean. During low tide at Popham Beach, the seas part and you can walk out to Fox Island. But don’t linger too long! 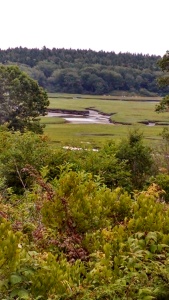 3. View of the Morse Tidal River in Phippsburg, Maine, from the real-life 1877 House. The house and its view inspired the home in Hidden Harbor where Katherine and her ex-husband, Barry, once lived—and where Barry now lives alone.

4.      Barry’s back porch. Strange, but it wasn’t until I read through proofs that I realized I’d even included the 1877 House’s green metal chairs. 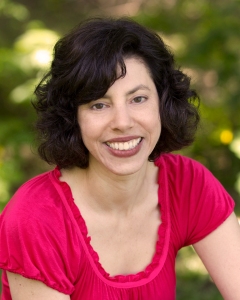 Lorrie Thomson lives in New Hampshire with her husband and their children. When she’s not reading, writing, or hunting for collectibles, her family lets her tag along for camping adventures, daylong paddles, and hikes up 4,000 footers.