I’m getting this post ready to go live on Women’s Fiction Writers and it’s strange for me because it’s the middle of the day. Why is that strange? Because for a few years now I’ve worked with and corresponded with Laura Drake, and it always seems to happen, oh, around five in the morning.  It’s always nice to know someone else is awake and in front of their monitor when everyone else is sleeping!

Laura is tireless in her work to promote women’s fiction, evidenced by her involvement in RWA-WF before becoming part of the Founding Team of the Women’s Fiction Writers Association.  What??? You don’t know about the WFWA? It’s a brand new, totally officially official organization on the cusp of being able to open up to members. There’s a link below so you can find out more information. I know that for me it’s an invaluable resource as well as a place I can always find a friend.

Now back to Laura. Laura’s a powerhouse author with a three-book deal, a penchant for motorcycles, a keen wit, and a real understanding of what it means to be supportive of other writers. 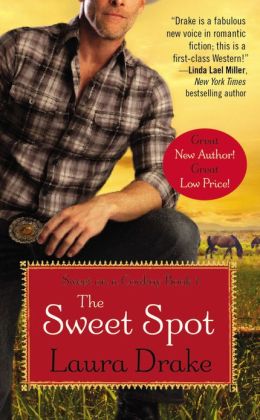 Amy: Laura, you went from aspiring author (and a million other things, including motorcycle chick) to author with a three-book-deal starting with THE SWEET SPOT which was released on May 28!! Can you tell us a little about that?

Laura: It took me three novels, and fifteen years to sell. I think it’s kind of like that sale at Nordstrom’s…you pass up a blouse, but you decide, when another woman picks it up, the perfect one!

No one wanted my first two books until the third one sold. Then they wanted everything I’d written.  I had the three book deal with Grand Central, and a one book deal with Harlequin’s Superromance.

Amy: How did your books change through the editing process? Was this hard for you? (I know that my book went through a big change, sometimes I resisted, but in general, the changes were on target and made it a better book!)

Laura: Well, The Sweet Spot had more changes than most, because it was written as WF, and sold as romance. The good news was it was close to the line (1/2 the editors believed it to be WF, the other 1/2, romance.)

The changes were mainly a matter of focus; changing the woman’s journey to include more of the hero’s journey. And advance the romance a bit. That was hardest to do, because my couple had divorced following the death of their son. Charla was addicted to Valium, and JB’s drug of choice was young and blonde. They had a long way to go to get back to each other. It took hours of angst and sweat, but it worked out in the end!

Amy: What’s your favorite part of the writing and publishing process?

Laura: I love the end. Not because I’m done, but because I’ve lived with the characters for nine months, and it’s so rewarding to give them their satisfying ending after torturing themthe whole book (I’m so evil.)

Believe it or not, so far, I love the promo! I’m an extrovert, and I love talking books and writing, so interviews, blogs, etc. are right up my alley!

In person is tougher. I spoke to a women’s group for the first time last week – I was terrified the day before, but when I actually did it, I had a great time!

Amy: How do you see social media in your writing life? Is it work, play, or both?

Laura: It’s a complete party for me. See, I’m lucky. I write about specific subjects (so far, anyway) Professional Bull Riding, and motorcycling (yes, I know, I’m odd.) It makes it easier to find my target audience.

I so love Twitter – all my peeps are there: writers, biker-chicks, bull riders, fans, I even follow a couple of very opinionated bulls!

Amy: You obviously know that the term women’s fiction sometimes gets a bad rap. Yet, there’s the new Women’s Fiction Writers Association which is primed to embrace the term and its authors (just like this blog does).  What is your own definition of women’s fiction and what’s your take on the conflict?

Laura: And thank you, Amy, for what you do for WF writers and readers. It’s so nice to find a quiet corner out of the fray!

I’m from the Rodney King, can’t-we-all-just-get-along, school. I love the new group because their mission is: An Inclusive Organization of Writers who create stories about a woman’s emotional journey.

That’s what Women’s Fiction is to me. I don’t understand getting our collective panties in a twist about a label.  What’s important is the story!

Amy: What’s your best advice for aspiring authors of women’s fiction (other than to join WFWA, the new Women’s Fiction Writers Association)?

Don’t waste time on things you can’t control, or what will happen, five steps down the road. I lost focus with all that distraction. Focus on your craft, and writing a great book. After all, Isn’t that why we chose to write to begin with?

Laura Drake is a city girl, who never grew out of her tomboy ways, or a serious cowboy crush. She writes both Women’s Fiction and Romance. The Sweet Spot, the first novel in her, ‘Sweet on a Cowboy’ Series, will be released by Grand Central in May of 2013, Nothing Sweeter, in December. Her ‘biker-chick’ novel, Her Road Home, will be released by Harlequin’s Superromance in August, 2013.

Laura resides in Southern California, though she aspires to retirement in Texas. She gave up the corporate CFO gig to write, full time. She’s a wife, grandmother, and motorcycle chick in the remaining waking hours.