You are here: Home / LOVE ME ANYWAY / Debut Author Tiffany Hawk Talks About Writing What You Know And Making It Work For Fiction

Debut author Tiffany Hawk turns the cliche, “write what you know,” upside down in her novel, LOVE ME ANYWAY. Tiffany worked as a flight attendant, and her book is about, you guessed it, flight attendants (and much more).  In her interview you can read about how Tiffany writes her book so as NOT to implicate anyone she knows (too much), what she thinks of the Women’s Fiction label (hint: she’s torn), and you can view her awesome book trailer at the end of the interview, and learn more about LOVE ME ANYWAY! 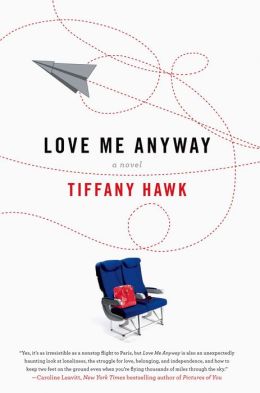 Amy: Congratulations on your forthcoming debut novel LOVE ME ANYWAY! I’m a debut author too (as you know). What’s your favorite part of the time leading up to your novel being available “everywhere books are sold?”

Tiffany: Thank you, Amy. I can’t wait to read The Glass Wives! I’m glad you asked me that question because it reminded me to take a step back and enjoy this moment. Launching a book is a bit like planning a wedding – it’s a life-long dream, but then you start obsessing about making everything perfect, and that can kind of take over. It really is exciting to be talking about publicity and events and to be working so closely with my agent, whom I adore. Writing can be incredibly solitary, so working as a team now is just such great fun. And nothing beats the occasional trip up to New York to meet with her and the publishing staff. As a military wife, I move around a lot and never know where we’ll end up, so I feel tremendously lucky to have spent the last couple of years near New York.

Amy: Tell us a little about the story—but no spoilers!

Tiffany: It’s a book about two young flight attendants who take to the skies to escape their troubled pasts. Most of us have dreamed of running away to a far off land, but these two actually did it. Of course, they get more than they bargained for, and along with exotic destinations, they get tangled up in some unhealthy situations and disastrous relationships. One of the things I wanted to explore was what happens when good people give in to passion and do things they’re not proud of. Can you see yourself as a good person again? What if you can’t let go of the things you shouldn’t want?

Amy: When it comes to writing a novel, are you a plotter or do you write by the seat of your pants (making you a pantser)?

Tiffany: Oh, I’m a big time seat-of-my-pantser.  I’ve drawn up all kinds of outlines and I’ll get super excited about a plot I’ve got cooking only to find that when I actually start writing the big scenes, none of those ideas feel right. I like having an idea of where I’m going, and sometimes the end is the one thing I do know, but plotting out the whole course is something I do better after I have wrangled the first draft into something somewhat resembling a storyline. Obviously, I spend a ton of time revising and will never be called efficient.

Amy: In LOVE ME ANYWAY, you took what you knew—your area of expertise being travel—and turned it into fiction.  Any worries that people will think this is in some way about you or people you know? Have you fielded any questions or concerns about this?

Tiffany: Yes and yes. In fact, that’s usually the first question I get. When it comes to all the little details about the job and the planes and the passengers, more than 99% is true. I had to fabricate maybe two or three things for logistical purposes, such as a route that didn’t exist at that time, but any craziness that seems hard to believe, it’s entirely real.

When it comes to the larger storylines, it’s much murkier. A lot of what I wrote about actually happened, at least in part, to me or someone I know. But I’ve taken things so much further that I do sometimes fear hurting someone. For example, Emily and KC’s relationship is quite similar to my relationship with my best friend. Like Emily and KC, we met on the first day of flight attendant training and were opposites in many ways. She definitely brought me out of my shell, but she’s nowhere near as wild as KC and thankfully, her “ending” isn’t complicated like KC’s. Fortunately, she is one of my biggest supporters and one of the bravest people I know. She happily reads a scene we both recognize and then rolls with it when it turns into something more scandalous. Even when the story makes “her” look bad or crazy or desperate or whatever, she gets a kick out of it. I don’t want to give any spoilers, but if you were her, you would probably be like, “you made me do WHAT?!” She’s amazing.

Amy:  What does the term/label/genre “women’s fiction” mean to you?

Tiffany: That’s a tough one. I love women’s fiction and yet at times, I have found myself dodging the label, which is so often used as an insult. That really is confounding, though, especially when you consider that female readers account for 80% of the fiction market. I mean, how can such a simple word –  “women” – be used to devalue something? How sexist is that!? I’m getting worked into a lather now. Part of me thinks I should start proudly announcing that I write women’s fiction. But I immediately fear being dismissed. We, I, all of us, have a long way to go.

Tiffany: Write from the heart. Not what the market wants, not what you think sells, not what a plot formula tells you to, not what rejection letters suggest. Take all of those things seriously, let them inform you and make you think critically about your work, but don’t write to them. Find your own vision. At one point when my manuscript was being rejected by publishers and it was abundantly clear that the draft wasn’t working, my agent and I had very different ideas on how to revise. I didn’t like her suggestion AT ALL. In fact, it made me cry, and that forced me to rethink the book entirely. There was a heated phone call, well, heated on my end anyway. I was so incensed that I didn’t care if I pissed her off. To my surprise, she was absolutely thrilled that I’d had such an emotional reaction and had found my true vision. For the first time in a long time, I wrote what I wanted, not what my grad school instructors would want, not what publishers would want, not what my agent would want, but what I really wanted. Not only did my agent love the revision, she sold it.

TIFFANY HAWK is a former flight attendant and a graduate of the MFA program at UC Riverside. Her essays and stories have appeared in The New York Times, The Los Angeles Times, CNN, National Geographic Traveler, The Potomac Review, StoryQuarterly, and NPR’s “All Things Considered.” A few years ago, she did the one thing flight attendants aren’t supposed to do and married a pilot. Together with their son, she and her husband now live wherever the Air Force sends them. At the moment, that’s Washington, D.C.

Visit Tiffany at tiffanyhawk.com, or for a comical two-minute sneak preview, watch Love Me Anyway the Short Film on Youtube.